Home » Uncategorised » GAP in the Market

Birmingham project partners The GAP Arts Project organised a fantastic festival reflecting the need for creatives spaces for young people and communities by turning a market into a festival venue. Read the details below:

Between 4 – 19 July The GAP Arts Project held a pop up festival, ‘GAP in the Market’, in the Birmingham Bull Ring Indoor Markets. 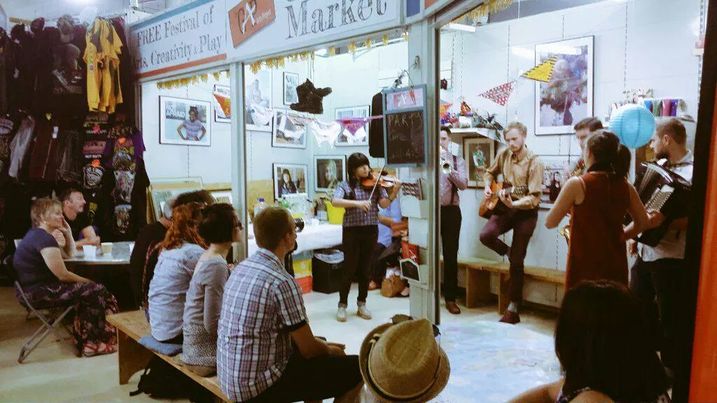 The festival was based around three core concepts of creativity, arts and play, using them as serious tools to learn about the city, its communities and ourselves. The programme reflected this ethos by using various forms of creativity, arts and play, from a series of script-readings of Edward Bond’s ‘The Sea’, to tinkering workshops, art hacks reminiscent of the Situationist practice of détournement, film screenings, exhibitions, discussions, debates with City Councillors, re-imagining the city with clay and more.

The range of activities allowed the festival to appeal to a wider range of interests, and also allowed for us to collaborate with other individuals and organisations. For example, Craftspace, a leading contemporary craft organisation, delivered two workshops which explored ideas and practices of craftivism (craft + activism). By the second session we had become more familiar with the concepts and worked with members of the LGBT community to discuss issues relating to sexuality and gender and employing our conversation in sowing messages, statistics or our feelings onto underwear which we then hung in the space. 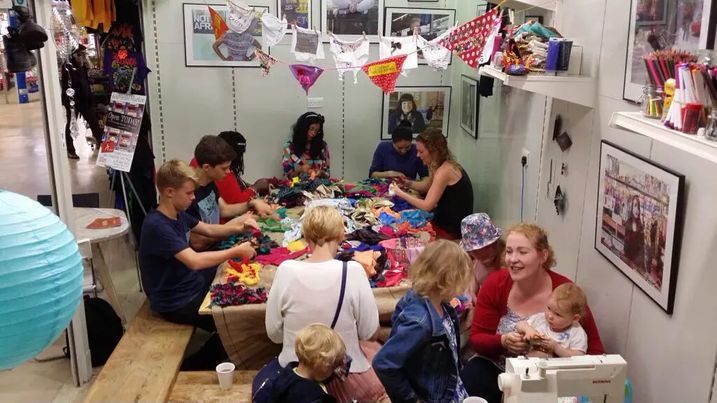 One of the central factors of the project was its location. Birmingham is Europe’s youngest city in relation to the population. Surprisingly it does not have any dedicated creative youth space. It was our concern to create a dedicated space for young people’s creativity, to allow for greater participation between the city and young people who are not in employment, training or education. The market seemed an appropriate place to do this as the Bull Ring Indoor Markets reflects the diversity of the city with its West Indies stores, Chinese grocers, jewellers, halal butchers and more. It also allowed us to frame a conversation with the city, ‘Look at what young people can do in this tightly packed space – imagine if there was a permanent creative youth space’.

Historically the markets are of great importance to the city as Birmingham grew from the markets to become known as the city of a thousand trades. Now more than ever in this era of hyper-commericailsation the markets are at serious risk faced with direct competition from the Bull Ring Shopping centre which when built became the largest shopping mall in Europe.

It was important to us to allow the project to raise issues of how people engage with their city, the stories of the market traders (some who had their stall for over a century, some for a few days) all of which was aimed at allowing young people to become active agents in their society. Part of this focused on an exhibition curated by two GAP members, who interviewed and took portraits of the stall holders, asking them questions of the relationship between markets and community, between play and learning. Another example is the Life in Tunes series, a take on the famous Desert Island Discs radio show, in which three young people interviewed three established artists based in Birmingham, asking about the significant moments which shaped their practice and personalities captured in a piece of music. The series was broadcast on a Birmingham Arts radio station.

Overall the GAP in the Market festival was important in creating a dialogue with young people of Birmingham, allowing them to use a space in the city centre to creatively explore themselves. It was important in telling the city that there is a desperate need to create a dedicated creative youth space.

With many asking how and if this project will continue or return we have decided to apply to the city council to use the GAP in the Market as a model to create a bigger space, for longer, during the summer of 2016.